A trade with The Dimwit 2

You can see what Sam of The Daily Dimwit got from me at his blog.  This is what I received in return: 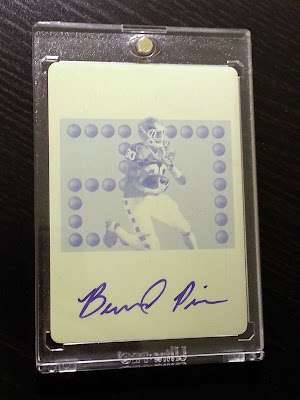 Front.  2012 Leaf Ultimate Draft Football, yellow printing plate rookie autograph of Bernard Pierce (Baltimore Ravens running back), #'d 1 of 1.  Awesome!  Pierce is a great young player.  He got 89 yards rushing and 4 yard receiving today in a loss to the Bengals. 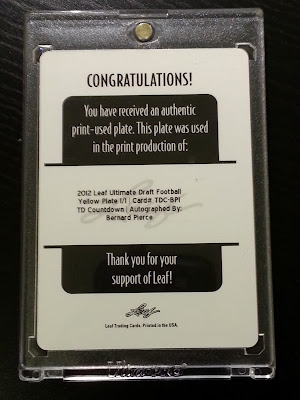 Back.  Thank you, Leaf!  These plates were used to print the "TD Countdown" inserts, which are serial numbered to the player's final college year touchdown total.

I recently participated in a hockey group break over at Cardboard Conundrum.  We busted one box each of 2010-11 Panini Luxury Suite, 2011-12 In The Game Enforcers, and 2011-12 Panini Rookie Anthology.  I picked the Los Angeles Kings and got the Carolina Hurricanes as my randomized second team.  I actually did pretty poorly on the group break, as I only received two base cards - one of Jeff Carter and one of Jeff Skinner, both from Rookie Anthology.  However, Matt was kind enough to throw in a hit for me! 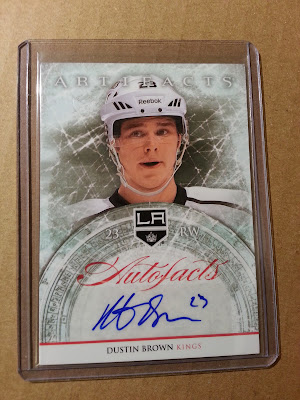 It is my first signature card of Brown, and it is a very nice one at that.  Thanks Matt!
Posted by Arno at 14:38 2 comments:

Winners of the card giveaway!

No more entries for the card giveaway will be accepted, found at my previous post.  The secret number between 1 and 100 is: 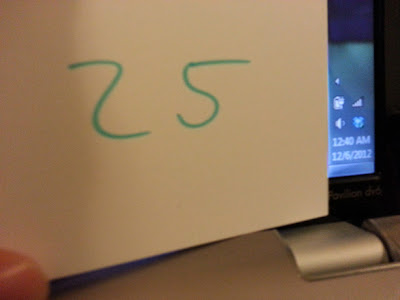 Congratulations to Spiegel for winning Set #1.  He was the closest for guessing the number 21.  Also, congratulations to Spankee for winning Set #2.  He guessed 33, which was the next closest.  They both got their first choices of card sets.  Gentlemen, please email me your mailing addresses so that I may send you your prizes (check my Blogger profile page for my email).
Posted by Arno at 15:40 2 comments:

Well, that was an unreasonably long pause between group break posts!  I have been in San Diego the past two weeks.  Here's a selection of various cards I received in Dan's The Other World group break (mostly Dodgers): 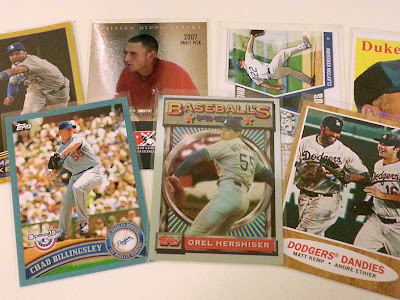 Since this is the last post about Dan's group break, I will do a card giveaway!  There are five of them in total, but I will give them away in two sets.  It is easy to enter this game of chance.  I will think of a number from 1 to 100... now!  I have now written that number on a dummy card with my new surf colored Sharpie marker (yes, I am proud of it) and taken a photo of it next to the date and time - 12:40 AM on December 6, 2012 to be exact.  Simply guess the secret number that I wrote down in a comment on this post and also mention your first choice of the two sets that you would prefer to receive if you win the giveaway.  (It would also be nice, were you to follow me on Google - left side of my blog.)  Here are the cards you can win: 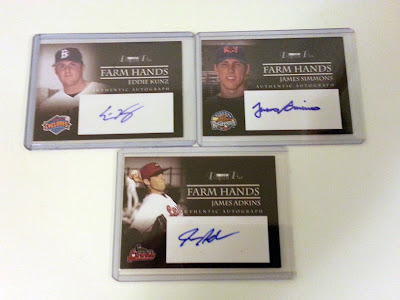 Set #1.  Three prospect autos from 2007 Tristar Prospects Plus!  From top left, clockwise: Eddie Kunz (heh), James Simmons, and James Adkins.  I have no idea who these dudes are, but maybe you do! 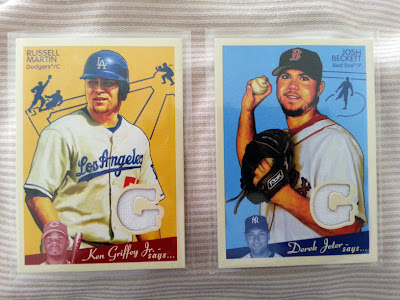 Set #2.  Two game-used jersey cards from 2008 UD Goudey.  Russell Martin and Josh Beckett.  Dan was awesome enough to throw in these two extra hits, but unfortunately I am trying to minimize my collection of relics.

So there you have it!  Have fun guessing the number between 1 and 100.  Naturally, closest number gets first pick of the card sets and next closest gets the set that is left.  I will leave entries open for a few days to a week at most.
Posted by Arno at 00:55 7 comments: