I first saw this card about two years ago on CheckOutMyCards.com.  But, it was not reasonably priced and then it disappeared from the site.  Whether someone purchased it or the seller realized how awesome the card was and decided to keep it, I know not.  Nevertheless, I finally have one!  It is also in way better condition than the one I previously tried to obtain. 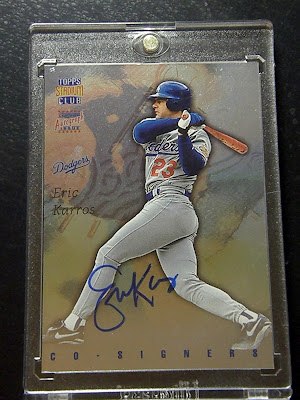 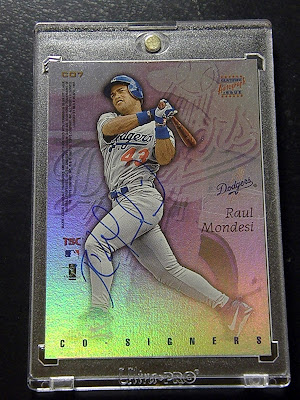 Yes, indeed.  One card, two of my favorite Dodgers from when I was a kid.  1997 Stadium Club #CO7, dual autographs of Eric Karros and Raul Mondesi.

Upon close inspection the signatures themselves are not in perfect condition, but this card totally rules nonetheless.  So awesome!
Posted by Arno at 13:41 4 comments:

A trade with The Dimwit

I am super late in posting about my first ever trade with The Daily Dimwit.  You can see what I sent Sam here on his blog - two Delino DeShields Jr. autographs from 2011 Bowman Draft and 2011 Playoff Contenders.  Sam has a nice scan of the cards on his post.  I am stoked for what I got in the trade: 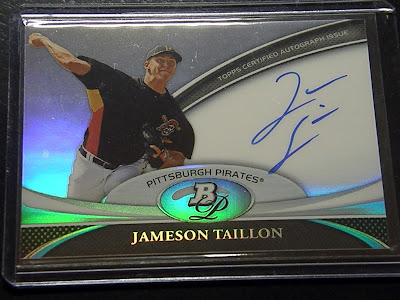 First up, a Jameson Taillon autograph from 2011 Bowman Platinum.  Sweet on-card signature.  This is my second Taillon auto.  Got high hopes for him! 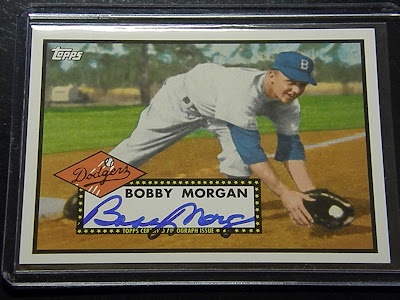 I pretty much hate Topps, but all these recent on card signatures are a good direction to take.  I especially like the 2011 Lineage old dude autograph cards.  Thanks, Sam!
Posted by Arno at 02:26 4 comments:

...as punishment for the excesses and insults you have perpetrated against common decency, the city of Los Angeles, and Dodger fans everywhere.  Too bad the asshole still made a profit.  Here's to better baseball days ahead! 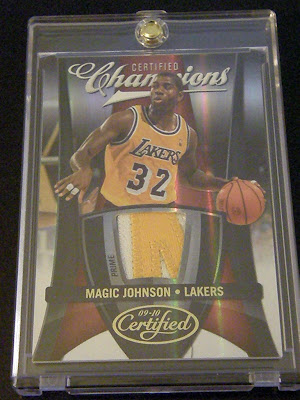 I celebrated my burfday this past weekend with copious amounts of rum and beer, and also The Raid.  If you are any fan of action and/or martial arts movies, you will very likely enjoy The Raid.  I should note that the full title is The Raid: Redemption.  If you happened to watch Merantau on Netflix, The Raid is by the same director and stars the same dude.  However, The Raid is like Merantau with a quarter of the plot and five times the athleticism and pencak silat destruction.

Apologies for straying off topic.  Without further ado, here is my video box break for 2011 Leaf Ink Baseball:


Man, I pulled some awesome cards of good players and Hall of Famers.  A quick rundown for those of us who are too lazy to look them up:

No go on the group break

Not enough interest!  It's all good though.  I guess I don't know many football collectors.
Posted by Arno at 16:34 4 comments:

I can get my mitts on up to 6 boxes (or if enough people are interested, a sealed 6 box case) of 2011 Topps Precision Football for about $100 each.  That is about $29+ less than Blowout Cards' pricing.  Each master box of Precision contains four one-pack mini-boxes with one autograph or auto-relic and three base cards in each.  So, that is a guaranteed 4 autographs or auto-relics and 12 base cards per master box.  You can see the checklist here.

The format should be quite simple: one randomized slot for the contents of one mini-box at $28 to cover the cost of product, shipping w/ tracking, and supplies.  It would be $25 at cost for additional slots after the first.

I could do it as a live break.  I've never run my own group break, but I have traded with many of you before, so I hope that some of you know I'm good on my word.

It is a semi-risky product, so if anyone is interested please let me know in this post's comments.  Should there be enough interest generated I'll then make another, actual group break post.

But a good habit nevertheless. 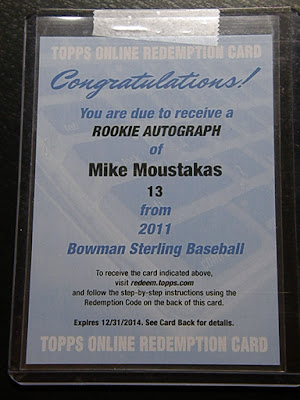 Though the shipping cost could certainly have been half as much for a redemption card.
Posted by Arno at 23:25 2 comments:

Baseball, that is!  My local card shop had two boxes of this product; I went back and purchased the second box.  I originally filmed this box break, but the angle was weird and I completely missed one of the autograph hits (I found it afterwards in the base card pile).  Here are the cards of note: 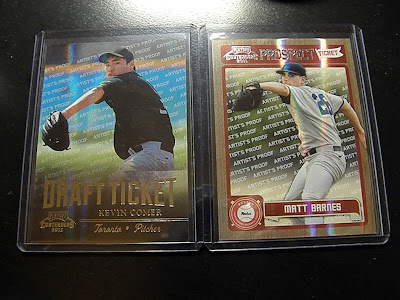 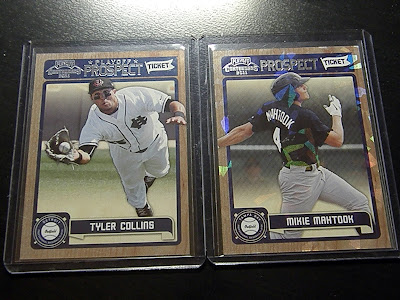 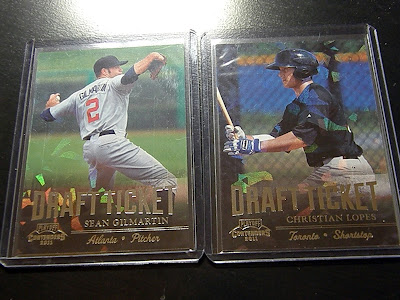 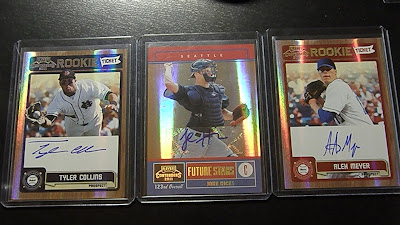 On left: Tyler Collins, Rookie Ticket on-card autograph.  We meet again, Collins.  He's a decent Tigers prospect.  In center: John Hicks (Mariners), Future Stars auto, #'d 012/199.  On right: Alex Meyer (Nationals), Rookie Ticket auto.  Panini never numbers the Draft and Rookie Ticket signatures, so one has to look up the print runs online.  I wonder why they do that? 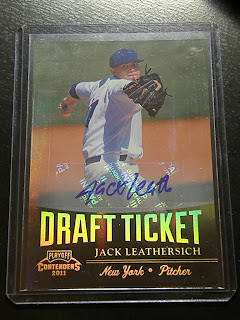 This card isn't particularly special for any reason.  It just has its own photo because this is the card I didn't realize I pulled.  I found it in the base card pile.  Good thing I wasn't shorted!  Jack Leathersich (Mets), Draft Ticket auto.  He is a top-15 Mets prospect. 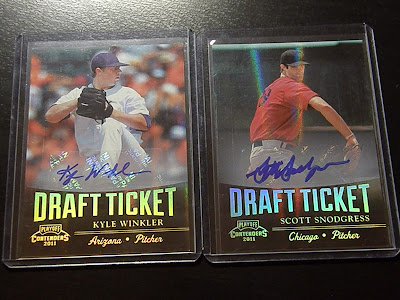 There you have it.  No more Contenders posts in the future (maybe).  Nice cards though!
Posted by Arno at 21:57 No comments:

A hobby box of 2011 Contenders Baseball currently goes for about ~$135 or more.  I got this one at my local card shop.  I was going to film the break but got lazy and was distracted by Modern Warfare 3.  Such a committed blogger.  Anyway, a box of Contenders should net you 24 packs with 5 cards in each.  Panini advertises each box to contain six autographs, with two of those six autos being on-card signatures.  I managed to pull seven autographs.  Sweet!  Here's the hits: 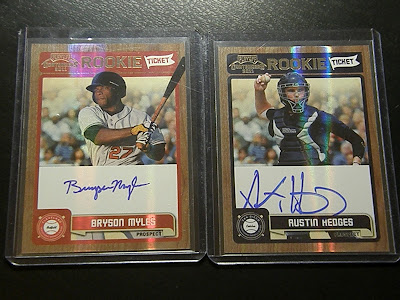 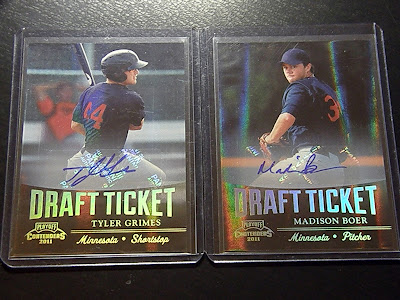 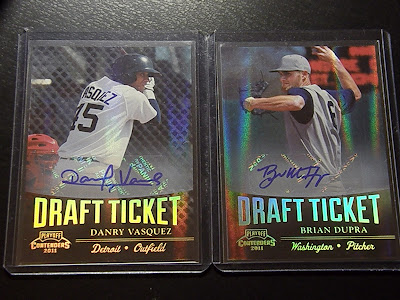 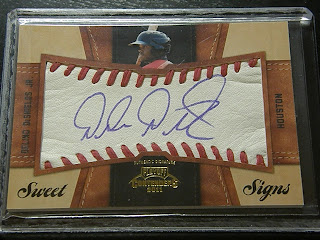 Well, well, if it isn't Delino DeShields, Jr., son of the former Dodger.  This is a Sweet Signs ball leather auto, #'d 75/99.  I have read mixed things about young Delino, not to mention he got arrested for drunk driving.  For shame!  Oh, and he's 19 years old.

Overall, Contenders is an okay product.  The main draw of it are the top prospect and star autographs, like Dylan Bundy and Josh Hamilton.  The cards in this release do look and feel very nice.  Particularly of note, all the cards are printed on a high-quality, sturdy, slightly thicker than normal card stock that still fits nice and snug into a standard toploader.  It's the little things in life, eh?  If you are looking for prospect autos, I'd say to perhaps pass this one over for the myriad Bowman's or Donruss Elite Extra Edition (though I have yet to open the most recent Elite Extra) - at least until the price drops.  If it drops.  I will upload photos of the inserts and base cards if anyone is interested in those.
Posted by Arno at 02:12 4 comments: