It's Good to be King

King Felix, that is.  Not as good to be the Mariners organization, I suppose?  I read today that the Seattle Mariners only gained a profit of less than $5.9 million in 2012.  You can check out the same blog post at Yahoo! Sports' Big League Stew here.  With that kind of profit margin, they could sign... an NBA player that never plays!  $5.9 million is less than a third of Felix Hernandez's yearly salary under his hefty new contract.  This card definitely did not cost anywhere near those numbers: 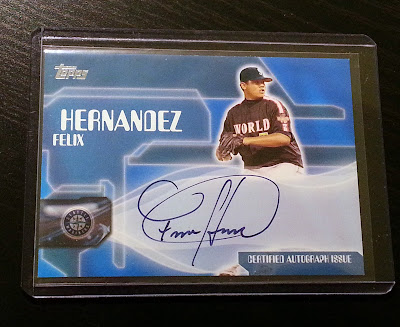 I purchased the above card a few months ago at a very reasonable price, almost exactly a month before Hernandez signed that massive contract.  It sure took me a while to post!  The prices for Felix's signatures seem to have risen gradually yet substantially since then.  Now, if only that elbow anomaly or what ever they found in his physical does not become something serious or detrimental, then the "King" will live long and prosper indeed.

There was a moment when I was concerned that the card actually depicted someone named Hernandez Felix and not the Seattle ace as I expected.
Posted by Arno at 20:20