Much of the mystique of legendary sports figures comes from the stories that are told about them.  Here are men and women who do things many of us can only play at, or perform feats we can only dream about.  Few fans know them personally, yet these venerated persons feel so familiar because of the oft-told tales of their trials and tribulations.  I'm sure many of you have heard or read a lot of stories about Earl Weaver and Stan Musial over the past few days.  I certainly read much about Weaver and Stan "the Man" when I was a kid.  I read about them in encyclopedias and sports books.  I was nerd.  I still am, in fact.  What sports fan or collector isn't?

Here's a funny little book my girlfriend gave me: 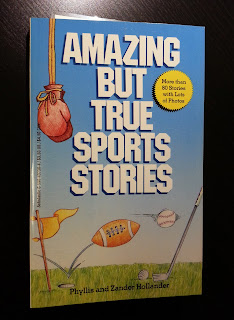 I owned a bunch of books like this when I was a kid.  The story of Earl Weaver's first "Double Heave-Ho" appears in this book.  The infamously fiery Weaver was ejected from both games of a doubleheader three times in his career.  By all accounts, he seemed like a manager I could get behind.  I would perhaps copy his style, were I to coach a baseball team.  Unfortunately, there is no story about Stan Musial in this book.  One can say the best story of Musial, though, is one of his career - as a humble master of his craft.

These are some of my favorite cards: 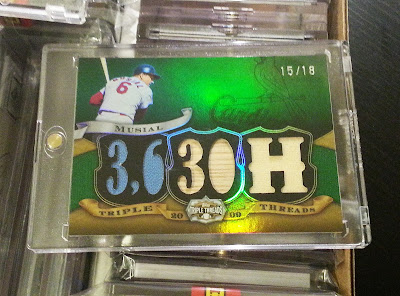 2009 Triple Threads, Stan Musial triple relic jersey-bat-jersey, #'d 15/18.  Emerald parallel?  It's from the first and only box of Triple Threads I've ever purchased. 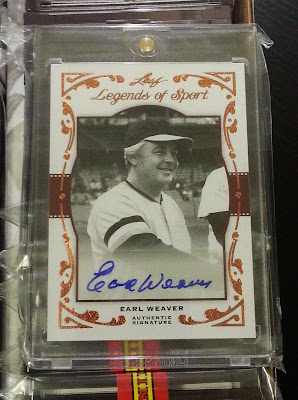 2011 Leaf Legends of Sport, Earl Weaver autograph, #'d 05/14.  Leaf should also make a signature card of him hollering or kicking dirt on an umpire.  Nice, calm photo of Weaver though.

(Did anyone watch the Falcons vs. Niners?  Atlanta really blew it.)
Posted by Arno at 15:30